Ruth Madeley is a British actress known for her roles in Years and Years and The Rook. Madeley was born with spina bifida and has worked with the charity Whizz-Kidz for much of her life. Madeley was nominated for a television BAFTA in 2016 for her work in Don't Take My Baby. 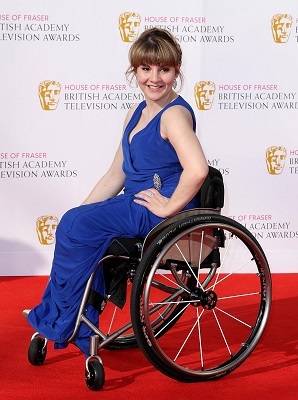 In 2012, Madeley wrote and starred in the Lime Pictures TV movie Scrims.[15] Madeley has had several supporting roles in television, including in Fresh Meat and The Level.[16]

Madeley starred as Anna in the TV movie Don't Take My Baby which was about a disabled couple's fight to prevent their baby from being taken away.[2] Madeley was nominated for a Best Actress TV BAFTA for her portrayal of Anna.[17] The next year, Madeley was listed as one of BAFTA's 18 Breakthrough Brits.[18]

In Russel T. Davies' HBO miniseries, Years and Years, Madeley plays Rosie Lyons. The role of Rosie was not originally written for a wheelchair user, but after Madeley's audition Davies decided to work with Madeley to reshape the role around Madeley's spina bifida.[14] Madeley plays Ingrid Woodhouse in the television adaptation of Daniel O'Malley's The Rook.[19][20]

Madeley's first theatre role was in The Greatest Wealth at the Old Vic. The Greatest Wealth consisted of seven monologues and was put together in celebration of the 70th anniversary of the NHS. Madeley's monologue, "Choice & Control" was written by Matilda Ibini.[21] In late 2019 and early 2020, Madeley played Barbara 'Buck' Buckingham in Teenage Dick at the Donmar Warehouse directed by Michael Longhurst. The play, written by Mike Lew, was inspired by Shakespeare's Richard III and the character of Buck was based on the character of the Duke of Buckingham. The role of Buck is explicitly written to be played by a disabled actor.[22]

In 2019, Madeley signed an open letter urging Hollywood executives to normalize disability by casting disabled actors to play disabled characters.[23] She appeared in the 2020 Christmas special episode of Would I Lie to You?.[24] In 2021, Madeley competed on Celebrity Best Home Cook.[25]

Madeley has been cast as Throat in the upcoming television adaptation of Terry Pratchett's Discworld novels, The Watch.[26][21] She has also been cast as Laura in the upcoming disaster drama The Light.[27][28] Madeley will appear in BBC America's upcoming collection of short films, Disability Monologues (working title), curated by Mat Fraser.[29]