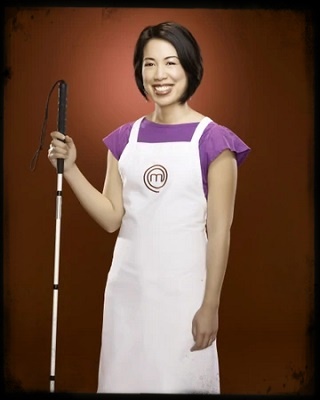 Christine Huyen Tran Ha (Vietnamese: Hà Huyền Trân;[1] born May 9, 1979) is an American chef, writer and TV host. She is the first blind contestant of MasterChef and the winner of its third season in 2012

Ha was born as an only child in Los Angeles County, California. Her parents were of Vietnamese origin; they immigrated from Saigon (present day Ho Chi Minh City) to the United States in 1975 after the Vietnam War.[4] She lived in Lakewood, California and Long Beach, California as a young child before her family moved to Houston, Texas.[5] Her mother died from lung cancer when Ha was 14.[6]

Ha suffers from neuromyelitis optica, in which a person's own immune system attacks the optic nerves and spinal cord. In 2004, she was diagnosed and gradually started losing her vision, and was almost completely blind by 2007. She describes her vision as "looking at a very foggy mirror after a hot shower".[9][10] She uses adaptive technologies to help her manage her social media profiles by herself.[11] Hà utilizes the following assistive technologies around her house: VoiceOver, JAWS, Aira glasses, Amigo portable CCTV along with a thermometer, food scale and liquid level indicator that gives an oral reading.[12]

Ha serves as Fiction Editor for Gulf Coast: A Journal of Literature and Fine Arts, and her work has appeared in Fire Point, The ScissorTale Review and PANK Magazine, among others.[13] In January 2014, she began hosting the cooking show Four Senses on AMI-TV.[1