Alaqua Cox (born February 13, 1997) is a Native American actress. She portrays Maya Lopez / Echo within the Marvel Cinematic Universe in the Disney+ series Hawkeye (2021)[2] and the upcoming spin-off series Echo, which focuses on her character. 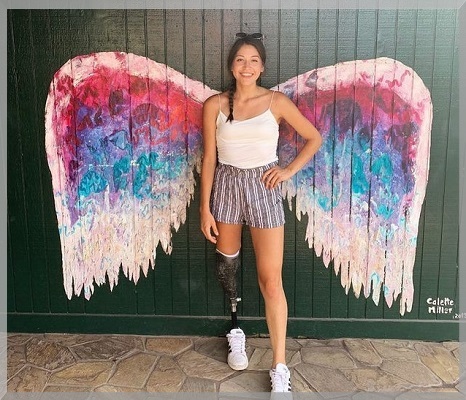 Cox was born Deaf[4] to Elena and Bill Cox. She was born and raised in the Menominee Indian Reservation in Keshena, Wisconsin and is of the Menominee and Mohican nation.[1] She has three siblings: Will, Jordan and Katie. She attended the Wisconsin School for the Deaf and played on the girls' basketball team from 2014 to 2015 in addition to taking part in their volleyball team.[5][6]

Cox is also an amputee with a prosthetic leg[7] but has not publicly revealed how she was injured.

She was cast in Hawkeye on December 3, 2020.[9] Her casting in Hawkeye marks her debut acting role. Following the news of her involvement as Echo, her casting received an overwhelming positive response from Twitter users as a role model in the Deaf community with deaf activist Nyle DiMarco giving her support.[10] In June 2021, Echo co-creator David W. Mack reacted to the news of the Echo television series by expressing gratitude to Cox for being a representative for deaf and indigenous youth, commenting:, "I taught at the School for the Deaf in Africa, Asia, [and] Europe, in my work for the U.S. State Department, [and] the students love Echo [and] will be happy about this."[11]

Cox herself was on the red carpet for Marvel's Hawkeye premiere, expressing gratitude towards Marvel for allowing her to flourish in the MCU as a Hollywood newcomer. "It's just so crazy that I'm getting my own show after Hawkeye. That was like my first acting role, ever," Cox told a reporter from Variety. She added, "I don't know why they're giving me this opportunity, but I'm just grateful. I'm excited for the support and being able to advocate for the Deaf community. We want to have that equality and get more people involved. I'm just so grateful for all of the opportunities I've been given."[12] In an interview with Disney's D23 magazine, Cox spoke about how Jeremy Renner and Hailee Steinfeld both made efforts to learn some American Sign Language so that they could communicate more easily with her, saying "I thought it was sweet of them putting in efforts to learn basic ASL to communicate with me. It means a lot to me as a Deaf person."